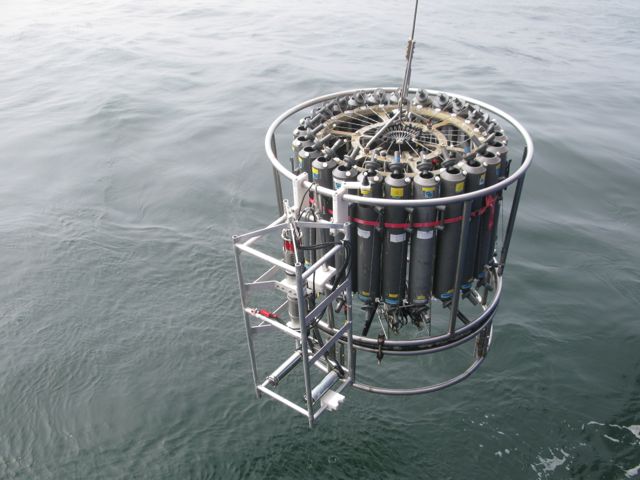 The UVP, attached to the CTD-Rosette. R. Kiko 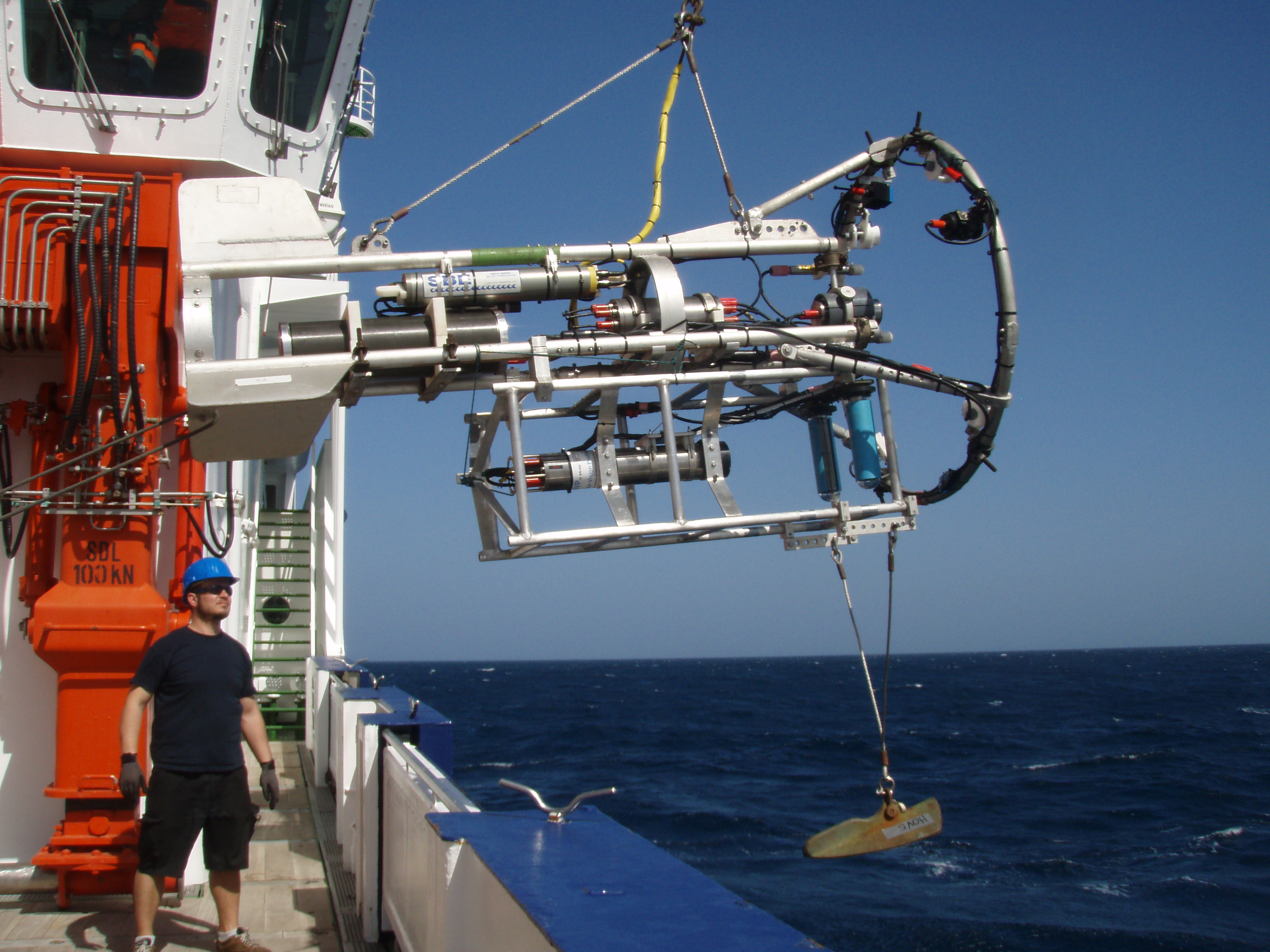 The UVP, attached to PELAGIOS. S.Christiansen 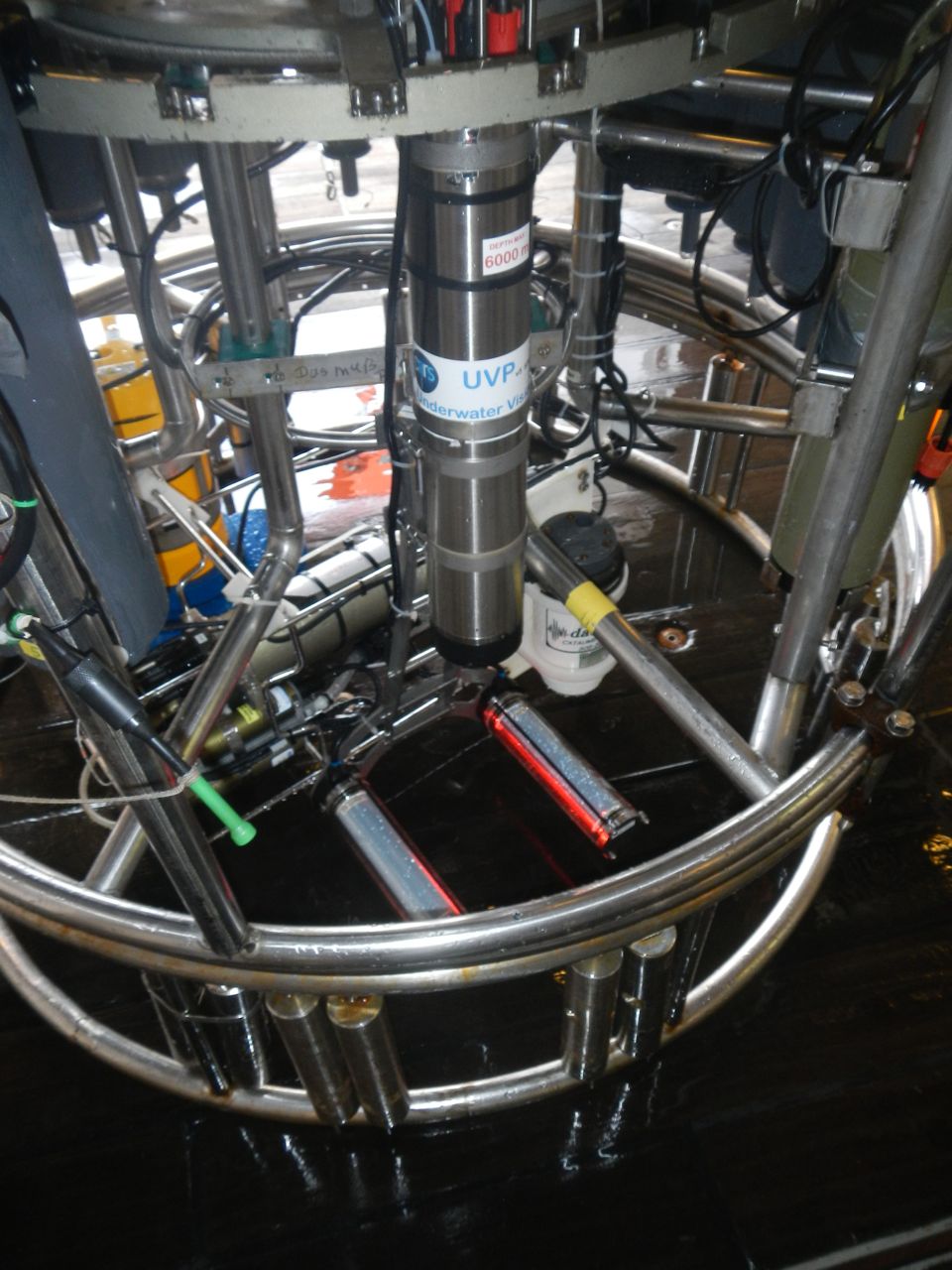 The UVP, mounted into the CTD-Rosette. R. Kiko

The underwater vision profiler (UVP) is a pressure-safe underwater camera, which can take images of Plankton and particles down to 6000 m depth. The UVP consists of a pressure-safe housing and two LED-flashes, which are coupled to the camera. These lights flash between 6 and 11 times per second and illuminate a volume of approximately 1 Liter between the lights. Therefore, 6 to 11 images per second are taken while the UVP is deployed. During a regular deployment from the surface to 600 m depth, about 6 cubic meters of water are imaged.

Deployment of the UVP with the CTD

We normally integrate the UVP into the CTD-rosette, a probe which measures Conductivity, Temperature and Depth, but also other parameters like oxygen. The CTD-rosette with the integrated UVP is lowered from the sea surface to the desired depth and the UVP takes images of plankton and particles during the descent. We also deploy the UVP autonomously and in a 'sandwich' with a towed video camera (see below).

Deployment of the UVP with PELAGIOS

Sometimes we do not deploy the UVP vertically with the CTD, but attached to another camera system, the towed ’pelagic in situ observation system’ PELAGIOS. PELAGIOS is an underwater videocamera which is towed behind the research vessel with 1 knot at distinct depths and that records especially gelatinous zooplankton. On three cruises we attached the UVP to this camera and towed it at depths of down to 1000 m. During these ’transect profiles’, substantially more images are recorded than during ’normal’ profiles, therefore we were until now hardly able to work with these data. With your help, we can now also explore this large dataset!

Processing of the images

Each image that the UVP takes has a size of about 25*25 cm and is immediately processed during the downcast. All objects on the image are counted and sized and objects larger then 400 µm are saved as thumbnails. This information, as well as the depth in which the image was taken is stored internally.

Once the UVP is on board, vignettes and data are transferred to a desktop computer. Thereafter, we process the images, measure the objects imaged and predict the object category using DeepLearning algorithms.

To check this prediction is the purpose of this game!

What is our current project?